So Solange went crazy on Jay-Z in an elevator after an event where people with a ton of money and power had access to a ton of intoxicating substances and the Internet has gone apeshit.

The Atlantic gives a weirdly in-depth look at not what possibly happened, but how to classify the event. And it’s not really an event, I shouldn’t have said that, but I do admit to having read the entire thing because I still maintain it’s better than gluing my eyeballs to TMZ’s asshole (doesn’t matter which part of the site, because the entire thing is an asshole).

I saw the video once. I watched it after a handful of jokes appeared in my Twitter feed, and because I have no way of understanding how to laugh at something without knowing about it, I searched out the video. If you’re a total nincompoop and haven’t seen it, basically it’s Solange, Beyoncé, Jay-Z, and a bodyguard in an elevator at the Standard Hotel after the Met Gala, and I guess Jay-Z says something to Solange because she just attacks him. Like kicking, punching, and apparently there’s more footage where she goes after him with her purse.

It’s not that I’m jerking it to celebrity dirt stories, but I will admit to loving the photo taken of everyone immediately after exiting the elevator, mostly because I love Beyoncé but also because I love this face of hers even more: 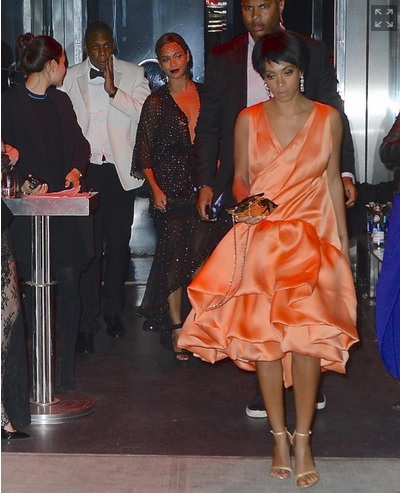 Some women in my office were talking about it today, and one of them said “you have to respect him for not just hitting her back.”

You don’t have to respect a man for not hitting a woman. You have to assume that a man who doesn’t hit a woman should be the standard. It might not be true in all cases, but holding up someone for not belting a woman in the face makes about as much sense as sanctifying everyone who somehow manages to avoid being a rapist every day. That’s reductive and stupid.

(It’s also pretty stupid to assume that a man who won’t hit a woman who’s hitting him had probably just wailed on his wife and that’s why her sister was so angry, which was the general consensus in my office full of idiots. But that’s beside the point.)

Am I saying it was right for her to attack someone, especially when she probably knew she wouldn’t hit her back? Hell no. It’s a general rule that you don’t go violently postal on people, especially when they’re part of your family. But we don’t need to call Jay-Z a hero for not smacking his sister-in-law in the face. We admire that he kept his composure, but as a society, we need to understand that no matter your gender, familial turbulence, or current status of getting the crap kicked out of you in the elevator of a fancy hotel, we do not assault anyone, but especially anyone who is smaller than us.

Why was Beyoncé just standing there, then? Who the fuck knows! Who the fuck cares! That’s family business, nobody needs to get in the middle of that! I assume that Beyoncé knows her sister and her husband better than I do and probably has a better way of handling the situation than me, TMZ, the Atlantic, or anyone else with an opinion on the matter.

Also nobody needs to talk shit on Beyoncé or Jay-Z because when I do think of them, I think they are terrific.

I'm Erin. I have tattoos and more than one cat. I am an office drone, a music writer, and an erstwhile bartender. I am a cook in the bedroom and a whore in the kitchen. Things I enjoy include but are not limited to zombies, burritos, Cthulhu, Kurt Vonnegut, Keith Richards, accordions, perfumery, and wearing fat pants in the privacy of my own home.
View all posts by erineph →
This entry was posted in The Pop Life, WTF and tagged beyonce, jay-z, solange, what the what. Bookmark the permalink.
Loading Comments...
Comment
×
%d bloggers like this: