We Can Go To Sleep Now, Right?

Jake just moved to LA for a job. Aside from Louis (and the people I know in Seattle, but I never had a longstanding tradition of spending New Year’s drunk in my pajamas with them), Jake is my only West Coast friend, and I imagined he was also watching every other person we knew celebrating the New Year hours before we could: 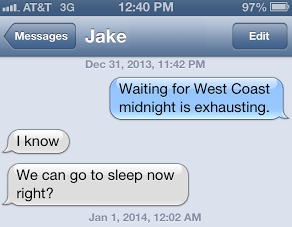 I got into bed immediately after this text, and only sent another to comment that the dumbass hippies in my neighborhood were setting off fireworks, and would Jake please avenge me if I died in a fire caused by them. He said that he would, and then asked me to delete his browser history in the event that he died as a result of falling celebratory bullets. I said that I would.

This is what’s called friendship.

My company recently decided that New Year’s Day was a holiday, and that my department – which traditionally only gets Thanksgiving and Christmas Day off from listening to clients bitch – did not have to be in the office for it. Which was nice. I mean, I wasn’t going out and getting drunk for New Year’s Eve, but that doesn’t mean I wasn’t going to appreciate the opportunity to sleep late.

I’m not sure what else I plan to do with this first day of 2014. Do the dishes, probably. I suppose I’ll also have to meet Graham at the laundromat, since he’s been complaining about having to do what he said he would do once we moved into this house I found by myself from halfway across the country to discover that it did not contain the promised washer and dryer or room to put them, were we to purchase a set. I should go for a walk. I should cook dinner. I kind of want to walk down to Roxy’s and treat myself to a late brunch, although it would mean trudging back up the hill and I don’t know if I’m up for that just yet.

Beyond today, I’ve been thinking about what to plan for this year, and how planning for it isn’t really any different from the regular planning I do. As a worrier, forward thinking is sort of my thing. I mean, we’ll be moving this summer, and I’ve already experienced stomach-churning anxiety over how much that’s going to cost plus the apparent non-availability of anything that seems habitable for less than a million dollars in this neighborhood or any surrounding neighborhood we’ve discussed.

I would have liked to travel this year, but with vacation days already blocked out for people promising to visit Seattle plus the expenses for moving, it looks like I have 365 more days until I have to worry about renewing my passport (although we are pretty close to Canada, and I should probably make it up to Vancouver sooner rather than later).

I would also like to pursue other employment opportunities this year. Not that my job sucks or anything, except that sometimes it does (sometimes they all do), and also the drive is a real pain in the ass. I don’t dream of an important position, just one that pays fairly, doesn’t require me to be bitched at by clients on holidays, and ideally, in a dream world, one that can be reached by a single bus ride or a long walk.

Lastly, the writing. I managed to fulfill the promise I made to myself by writing on New Year’s Eve. I picked a story I’d started last year (and posted, unfinished, to a workshop) but stalled on because I didn’t know where to go with it. I still didn’t know when I sat down last night, but after re-reading what I’d already done and finding the voice again, I started typing and within two paragraphs, I realized: I know how the story ends. I wasn’t able to write that ending before running out of steam/awakefulness last night, but I know how it ends and now it can be finished.

I also started reading through the rest of my drafts and decided that I’ve got some decent stuff in there. Ideas I’d forgotten I’d had. Words I wrote down because I loved them and wanted to use them someday. So for this year, I’d like to develop a few of those sentences, paragraphs, or concepts into stories. I’d like to submit one and hope that some editor pities me enough to publish it.

I'm Erin. I have tattoos and more than one cat. I am an office drone, a music writer, and an erstwhile bartender. I am a cook in the bedroom and a whore in the kitchen. Things I enjoy include but are not limited to zombies, burritos, Cthulhu, Kurt Vonnegut, Keith Richards, accordions, perfumery, and wearing fat pants in the privacy of my own home.
View all posts by erineph →
This entry was posted in I Heart, Writing and tagged 2014, new year's day, new year's eve, writing. Bookmark the permalink.

1 Response to We Can Go To Sleep Now, Right?