The Death of Sound

On Thursday, I texted Mike and Courtney to see if either of them wanted to come over on Friday night and watch “Return to Oz” with me. Nothing big, not an event, I just had the disc from Netflix and had been wanting to re-watch it since the last time (when I was probably nine?), and I never feel like going anywhere on Fridays, especially when it’s suddenly 19 degrees in Seattle at night.

(Yes, St. Louis, thank you. I am being a pussy. But how about you relocate to a place where the weather is wet-but-temperate and have to spend whole minutes deciding how you’re going to layer your clothes before you go out, because walking up hills is one thing when the temperature is below 20 but standing still for even a few seconds is quite another.)

But “Return to Oz” will have to wait until next Friday, because I’d forgotten about Cate Le Bon and telling Courtney that I’d go to Cate Le Bon, so I apologetically rescheduled with Mike and then went to Cate Le Bon. With Courtney.

Cate Le Bon is a Welsh singer, songwriter, and musician who’s kind of like a hybrid of Annie Clark, Nico, and Karen O. She has, as Courtney says, “ a small smile, a cold coolness, and a very firm, yet friendly handshake.” Her show was at Barboza, which, unpopular opinion #1, is a Seattle venue I really like. I mean, I know it’s part of the Neumo’s complex and apparently it’s cool to hate that, but fuck you, okay, because Barboza is pretty and the people are always nice and for my money, that’s better than a more “legitimate” bar that smells like pee and has terrible punk rock idiot poetry Sharpie’d all over the bathroom stalls.

Courtney found out about Cate Le Bon through some YouTube collabo-videohole, then checked out her labelmates and Soundcloud, then bought every album she’d ever made and that is why there’s no excuse for this shit: 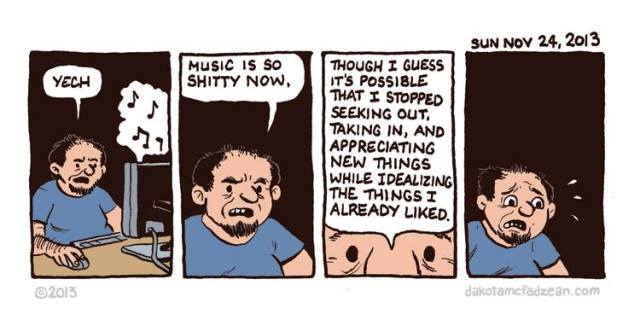 You are not allowed to bitch and moan about the state of music today. Mostly because when you do this, you’re whittling “music today” down to the narrowest of pop radio margins. If I thought music began and ended with whatever gets played twice an hour on my local Z-one-oh-whatever station, then yes, I suppose I’d do that, too. But I don’t, because I’m not an idiot. I’m not lazy. And I realize that it’s my responsibility to find music I do like.

The first way I remedy that is by not fucking listening to my local Z-one-oh-whatever station. I can’t really understand why some people treat this (or, worse, the local “we play anything and everything!” station that curiously considers “anything and everything” to be only the songs that hit the Billboard Top 10 between 1985 and today, meaning basically anything that probably played at your prom…and, occasionally, “Brown-Eyed Girl,” which would be plenty enough reason to hate Van Morrison if “Madam George” was not in his catalog) the end-all-be-all of radio, as every city and most smaller towns have an independent or college station. I suppose some people might find it difficult to swallow this sort of programming after a lifetime of being force-fed major industry-marketed dreck, but these people also seem to have difficulty with reading, dramatic movies without war scenes, and paying attention for longer periods of time. I’m not saying you have to be smarter to listen to independent media but, yeah, actually, I guess I am saying that.

Even if you don’t want to make the easy-peasy switch to changing radio stations, it’s not at all difficult to re-program your brain into the understanding that the music industry works differently now. It’s not just the artists who sell big that get to be heard. With sites like bandcamp, Soundcloud, and Last.fm as well as the wealth of podcasts and music publications offering full access to their reviews and streaming features online, there is no fucking way that anyone can honestly say they can’t find any new music they like. There is an infinite amount of stuff out there and you don’t even have to take a shower or wear real clothes to find it. Treat these places like you pretend to have once treated your local record store. Go browse. Try things out. Fall down a collabo-videohole or two, look at record label lineups, just go find shit instead of sitting there wondering why no one is Nirvana anymore.

(Unpopular opinion #2: Nirvana was only okay. Also I will not take you to the Kurt Cobain suicide house if you visit Seattle. Deal with it.)

I'm Erin. I have tattoos and more than one cat. I am an office drone, a music writer, and an erstwhile bartender. I am a cook in the bedroom and a whore in the kitchen. Things I enjoy include but are not limited to zombies, burritos, Cthulhu, Kurt Vonnegut, Keith Richards, accordions, perfumery, and wearing fat pants in the privacy of my own home.
View all posts by erineph →
This entry was posted in Playlists, The Internet is My Boyfriend, The Pop Life and tagged barboza, cate le bon, dakota mcfadzean, music, nirvana, return to oz, seattle, unpopular opinions. Bookmark the permalink.
Loading Comments...
%d bloggers like this: