The Captain of My Burden

I got stuck in traffic on my way home Thursday night, and by “way home” I mean “in the general direction of home,” because my normally 30-minute commute took two fucking hours and about one hour of that was me just sitting in the same spot on the same creepy back road. I had to pee pretty much the entire time but couldn’t because a) it was an industrial road with no trees or other shelter, b) some homeless dudes were fishing off a bridge nearby and would have seen it, too, and c) what if traffic started moving again OH HAHAHAHAHA that last bit was hilarious. Eventually, I got sick of sitting and turned around, finding a different route that allowed me to…sit there. More. Well, this sitting wasn’t quite as stationary as the other sitting, but it was still pretty miserable and I still really had to pee.

While I sat there, I texted the friend I’d intended to drink with that night. I first texted that I would not likely make it, then I texted that I passed a distillery that was fucking CLOSED, and then this happened: 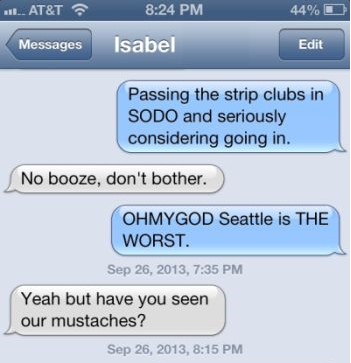 As an appreciator of facial hair, I suppose she has a point, but I don’t know if – for me, anyway – the mustaches make up for a 2-hour commute.

Some guy on a motorcycle hit a guard rail, by the way. He hit a guard rail and was ejected from the overpass, and in Internet parlance, you know he dead. The same thing happened to another guy less than 24 hours before, and the next morning, another person (this time on a motor scooter, I think) bit it in the tunnel right about when I was trying to drive to work. I know you’re not supposed to speak ill of the dead, but the rainy season is starting here again and I knew this would happen. Seattle is too full of incompetent careless drivers at the best of times, but when the weather gets a little inclement, the Darwin Award recipients come out in spades.

(On the plus side, it’s finally hoodie/indoors/casserole season! Hooray!)

While I waited in traffic the other night, I called Stephanie to see how things were going. It was nice to hear her voice; these days, most of my communication with my non-Seattle friends is online. While I kind of like this because I’m not much of a phone person (I talk too fast, maniacally fill awkward silences with nonsense, and apparently I’m a heavy breather), I do sometimes miss people’s voices, those hitches in tone or particular inflections, and the small noises they make right before they laugh.

And the answer is: Yes. No. Sometimes?

Because some days are shit. I mean, there’s always a part of the day where I get that achy lump in my throat that usually means I’m going to cry but somehow I don’t, and the times when I feel stressed or helpless are always magnified by about a billion even though my logical brain understands that I’m capable of completing the task at hand. And there are days when I’m driving to work (not even in apocalyptic traffic) and something clouds over me that feels like death. I know from panic attacks and that’s not it, but if anything, it feels like the onset of a panic attack that never transforms into a full-blown freakout shitshow. Which is kind of worse, because it lasts so much longer than it should and I wish it’d get it over with, already. Sometimes this feeling can last for the entire day, and sometimes it’s over by lunch. I can never predict what my broken brain is going to do, and that’s when I think that my nervous breakdown is coming along just fine.

And then there are the okay days, where I feel a mild malaise but certainly nothing more severe than how it feels to be a regular adult. I can enjoy cooking and the Internet and funny TV shows. And, weirdly maybe, I’m a little excited about the onset of near-constant-rain-until-April in Seattle, because I have always liked this weather, and it doesn’t feel like the entire city is mocking me with sunshine when all I feel like doing is curling up on my bed in total silence. The rainy season kind of makes me feel like my nervous breakdown is a little but under my control. I am the captain of my burden, after all. Ain’t no one gonna own this shit but me.

I thought about buying this for myself the other day, but ultimately decided to buy this other thing for Stephanie, instead. I have enough art on my walls as it is, but who knows if she needs a desk calendar for next year? And who doesn’t need to be reminded to live every week like it’s Shark Week?

PS – It went over great, I am a friend champion. BRAGGING.

I'm Erin. I have tattoos and more than one cat. I am an office drone, a music writer, and an erstwhile bartender. I am a cook in the bedroom and a whore in the kitchen. Things I enjoy include but are not limited to zombies, burritos, Cthulhu, Kurt Vonnegut, Keith Richards, accordions, perfumery, and wearing fat pants in the privacy of my own home.
View all posts by erineph →
This entry was posted in Sads, Seattle and tagged 30 rock, depression, nervous breakdowns, paperchat, seattle, traffic. Bookmark the permalink.
Loading Comments...
Comment
×
%d bloggers like this: