You want to know about a big difference between St. Louis and Seattle? St. Louis’ front page news is usually about things like homicide, double homicide, armed robbery, police chases, and mystery dead bodies found in cars, alleyways or abandoned buildings. Or it’s not, but only because that kind of thing happens so often that it rarely merits the front page anymore. 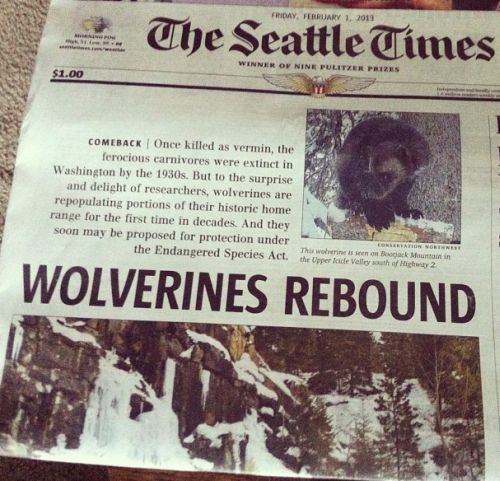 I came home to find this paper on the coffee table this weekend. After my initial thought (“OH, FUCK”), I texted Graham to ask if he bought the paper purely for the headline.

This is just one way that Seattle is different from St. Louis, and while I’m scared as fuck of wolverines, I still prefer knowing that they’re back from extinction in this state to the evening news telling me about the source of gunshots down the block.

When we first moved here, Mike told me that whenever he thought about being totally happy with the people he loved, he imagined them moving to Seattle instead of him moving back to St. Louis. I completely understand this; I’m happy here, but man, if I didn’t wish that even a handful of the people I miss would move out here and we could all get a big place together. Because ultimately, I like here better. I just like them more, and I wish I could have the most awesome combination of the two.

I will settle for having them visit me, though, and for the most part, I’m excited when people come to Seattle and I can show them around. While nearly every one of my friends would be a welcome visitor, I’m aware that there are some people who think travel means the Magic Kingdom, and who spend their time in any other city wondering why it isn’t more like home. Well, dummies, because it’s not home.

Back when I lived in touristy cities, all of my friends were too young and poor to do much traveling. The two friends who did visit were Patty, who, when we were walking under the pier in Virginia Beach, said “I feel like I’m on Baywatch and this is our hangout” and Chrissy, who had an eating contest at Outback Steakhouse with three dudes. And I’m pretty sure she won.

Then I moved back to St. Louis, where almost everyone already lived. So I never really had the opportunity to act as a tour guide around a new city for someone. But everyone is older and has more money now, and I’m thrilled to show people around Seattle, partly because the Steitzeseses, Mike, Robin, and Crossley did the same for me over a year ago and were so good at it that I moved here. I’m more than happy to tell my friends what I love about this place. I’ve already gotten to do this a couple of times and in both cases – Mike and Abbi, who came when it was raining and gross, and Kat, who came for just one day for work – it was great!

Unfortunately, not everyone is like Mike, Abbi, and Kat, because there is a whole other class of traveler. This other class arrives resisting or resenting a new city because it’s not filled with the people, places, and customs they’re familiar with. These people seem to miss the point of traveling altogether, which I’d never want to do, nor do I ever again want to live through the humiliation of standing next to someone who’s doing the equivalent of boorishly broadcasting to everyone within earshot that they are a tourist and fuck anyone who has a problem with it.

Look, if this is you, then I’m telling you on behalf of all your out-of-town friends: this has to stop. If you’re happiest hanging out at the same bars with the same people who get the same amount of drunk and stupid every night before making the same mistakes and that’s cool where you live, then how about just stay where you live? Just save some money and stay home. Or if you must travel, stay in the hotel room with some beer and the number for Domino’s. Don’t call me. Don’t ask me for recommendations. Don’t expect me to hang out and show you around and put up with your bullshit. Nothing I can tell or show you is going to make any difference in that tiny fucking brain of yours.

Travel – actual travel – goes far beyond the Disney shuttle from the airport to the hotel, or the all-inclusive package in Cancun that allowed you to vomit your dumb guts out at Señor Frogs three nights in a row. It’s about the experience of new things in a new place as a new person. You don’t have to love Seattle like I do or see it through my eyes exactly, but if you’re not even willing to make the effort? I know a few dozen bars on the South Side that’ll sell you buckets of Bud Select for cheap and never once challenge you to see the world any differently.

I'm Erin. I have tattoos and more than one cat. I am an office drone, a music writer, and an erstwhile bartender. I am a cook in the bedroom and a whore in the kitchen. Things I enjoy include but are not limited to zombies, burritos, Cthulhu, Kurt Vonnegut, Keith Richards, accordions, perfumery, and wearing fat pants in the privacy of my own home.
View all posts by erineph →
This entry was posted in I Just Can't, Seattle, WTF. Bookmark the permalink.

2 Responses to The Traveler’s Guide