Achilles has his heel, I have my throat. In thirty years, I’ve had strep probably six times, mono twice, thrush once, and your run-of-the-mill sore and irritated throat a couple of dozen times. And I don’t smoke ever or scream as habit, so after these obvious causes or eliminated, I seem to be congenitally weak in this area.

The other day I felt another sore throat coming on, and while I knew it wasn’t strep, mono, or something very serious, I knew it would inconvenience me for awhile, and so far, it has. I’ve been sniffing, coughing, and feeling like garbage for a few days now, and because I’ve never been able to figure out how to make chicken noodle soup without the noodles soaking up all the liquid and turning the leftovers into mush, I made a different salve.

I didn’t use a published recipe and I don’t have ramekins, but I did break the process down into its parts and dumped each one into a casserole dish. While it didn’t end up curing my throat, it did become something I craved for the smell and the leftovers. It looks like a lot of stuff, but it’s actually really easy to prepare if you a) break it into parts and b) have an hour to listen to music while you putter around in the kitchen.

Heat oven to 425. Brushing chicken thighs with olive oil, roast for 45 minutes to 1 hour (until juices run clear). Set thighs and roasting pan aside to cool partially, and reduce oven to 375.

In a stockpot over medium heat, heat 2 tbs olive oil until shimmering and add carrots, celery, and leeks. Stir to coat in oil. After about 5 minutes spent stirring occasionally, season with ½ tbs. salt and some of the pepper and stir again, continuing a few times to make sure nothing burns.

When the vegetables have begun to soften, add thyme, rosemary, and garlic and stir, cooking for an additional five minutes until everything is fairly soft, or at least soft enough that you’d put it in your mouth without being creeped out. Add the wine and stir to deglaze the bottom of the pot, then add the potatoes, parsnips and peas and stir until combined.

Pour the vegetable-starch mixture into a bowl and turn off the burner heat for a little while.

Once the chicken is semi-cool (mostly for your fingers rather than the recipe), pull the meat from the bones and separate as much fat as you can. Or whatever, but thigh fat can be really gloopy and gross in your mouth. Anyway, as you pull the meat, return it to the pan drippings.

Add veg-starch mix and chicken-with-pan juice to the roux and stir to combine. Add remaining salt and pepper, more to taste if you want. Reduce heat to very low, stirring occasionally while you deal with the puff pastry.

I never make puff pastry. Ina Garten says it’s super easy but she probably has a housekeeper to wash her dishes, so I don’t listen to everything she says. Just buy the puff pastry, okay? Pepperidge Farm has a sheet version that you can buy in the frozen dessert section (usually with the pie crust and phyllo dough). Just make sure that you keep it refrigerated for 24 hours before you use it, and only take it out of the fridge immediately before you need to use it. It’s much easier to work if it’s cold.

On a clean surface, sprinkle some flour so the pastry dough won’t stick. Lay one sheet of the dough on the floured surface and, using a floured rolling pin, roll the dough from the center outwards until it’s stretched enough to fit over at least half of your casserole dish. Set aside (again, on a floured surface) and do the same with the other sheet.

Coat the casserole dish with cooking spray and then pour the filling into it. Drape the pastry dough sheets on top of the dish. I crimp the dough on the inside of the dish instead of over the edge, because over the edge sticks too much.

Brush the top of the dough – including the crimped part – with egg wash, and sprinkle with just a little bit of salt. Cut small vent holes into the dough with a knife.

Bake for about 25 minutes, or until the crust is golden brown and the filling is bubbling. Remove from oven and let sit for at least 5 minutes before serving. 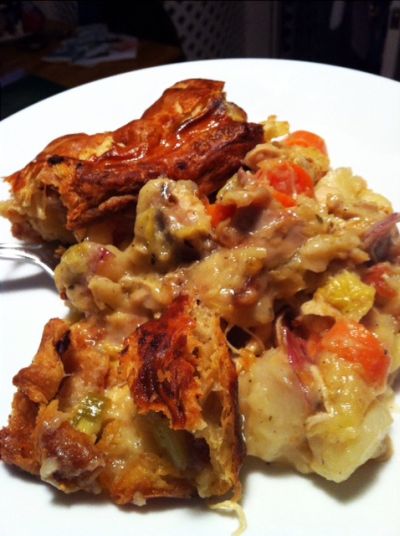 (This can be made ahead of time and refrigerated, just wait until you’re ready to bake before you apply the egg wash. It’s also great as leftovers and can probably be frozen pretty easily, at least if the Marie Callendar versions are to be believed.)

I'm Erin. I have tattoos and more than one cat. I am an office drone, a music writer, and an erstwhile bartender. I am a cook in the bedroom and a whore in the kitchen. Things I enjoy include but are not limited to zombies, burritos, Cthulhu, Kurt Vonnegut, Keith Richards, accordions, perfumery, and wearing fat pants in the privacy of my own home.
View all posts by erineph →
This entry was posted in I Eat. Bookmark the permalink.