To steal a line from the Internet, I love waking up in the morning and Barack Obama is president. I also love that Missouri kept Todd “Rape Detector” Akin out of the Senate and Washington approved same sex marriage and the recreational use of marijuana. I also also love that a record number of women were elected to office, including the first openly gay woman and the first Hindu American woman.

I love that The Stranger made this their headline so much that I saved it under “best headline ever.jpg” and will look at it whenever I feel down: 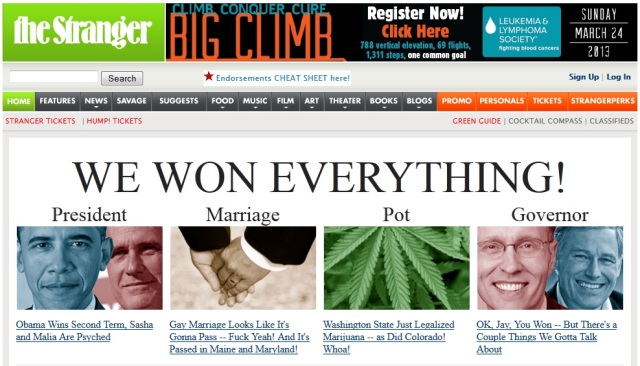 I love that Courtney finished a long day at work and agreed to meet me at a bar, firstly because I was too nervous to stay in the house and continue checking the Internet for election results, secondly because we ended up at a bar where there were TVs and people cheering and friendly dogs and even though it was late, we stayed to watch President Obama’s address.

I love that I finally got my last paycheck from my old company, after a month and several requests for an address change and a duplicate check (because no matter what they say, the first one was never sent).

I love that many of you may suspect that I’ve been kidnapped by aliens and replaced by a replicant. I assure you that this is not the case, and that sometimes I just love a lot of things.

I'm Erin. I have tattoos and more than one cat. I am an office drone, a music writer, and an erstwhile bartender. I am a cook in the bedroom and a whore in the kitchen. Things I enjoy include but are not limited to zombies, burritos, Cthulhu, Kurt Vonnegut, Keith Richards, accordions, perfumery, and wearing fat pants in the privacy of my own home.
View all posts by erineph →
This entry was posted in I Heart. Bookmark the permalink.
Loading Comments...
Comment
×
%d bloggers like this: