I’m too nervous to do anything educational like read or watch a documentary, and it’s too rainy for me to walk around the neighborhood (plus I still can’t get the hang of living in a city where it’s pretty safe to walk at night), so I’ve got Season 1 of Parks and Rec on in the living room and I’m compulsively refreshing Tumblr in the hopes of avoiding election coverage that already looks really, really depressing. 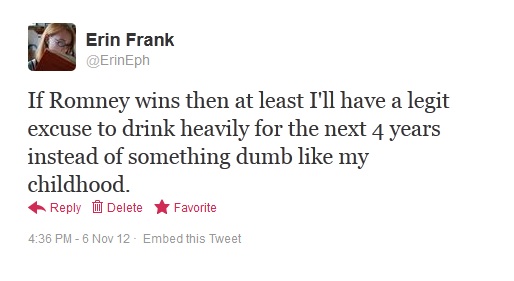 It’s just so frustrating to me that the majority of Americans would vote for a person and a party that is so defiantly anti-education, anti-healthcare, and anti-everyone who isn’t a rich white male, as if the majority of Americans would love for their country to go backwards about 100 years or more because gee, don’t we all miss those witch burnings and racially motivated lynchings?

I mean, I know I’d survive a Romney presidency just like I survived the Bush presidency – uncomfortably, with lots of rage and fantasies about spitting in his face on national TV – but it’s more about the reminder that so much of this country chooses a leader that has no accountability to his fellow citizens and doesn’t even pretend (at least not at all convincingly, because I know that sneer when I see it) to give a shit. I’m 30 years old so I’ve already realized that quite a lot of the people I encounter on a daily basis are selfish morons, but it would be so nice to know that just enough of the people out there are thinking and learning, and care about issues like not living under the thumb of a multi-millionaire stooge serving the interests of the most bigoted and exclusionary constituents whose only interest in regards to the rest of the country is keeping them poor and convincing them that it’s their own fault.

Oh look. The rain stopped. Mostly. It doesn’t really stop here, at least not in the way that “stop” means “completely, even including the constant mist that makes everyone’s hair look ridiculous all of the time oh that’s why so many women look like they don’t care anymore.” I’m getting the hell out of the house and not checking my CNN app once while I’m out there.

I'm Erin. I have tattoos and more than one cat. I am an office drone, a music writer, and an erstwhile bartender. I am a cook in the bedroom and a whore in the kitchen. Things I enjoy include but are not limited to zombies, burritos, Cthulhu, Kurt Vonnegut, Keith Richards, accordions, perfumery, and wearing fat pants in the privacy of my own home.
View all posts by erineph →
This entry was posted in I Just Can't. Bookmark the permalink.
Loading Comments...
%d bloggers like this: