It’s a Beautiful Day for the Zombie Apocalypse

Everyone! I did it! I did my first 5K yesterday! It was hard and dusty and filthy and we were pursued by zombies, and today I hurt too bad to move very much! The weather was beautiful! I got a sunburn! Also, for the confessional and disgusting requirement of this blog, it was the first day of my period! IT WAS AWESOME! 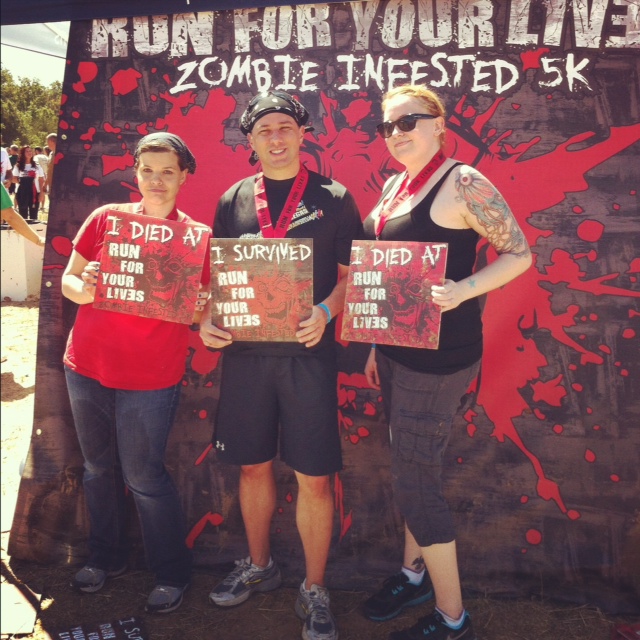 I didn’t say I ran my first 5K, because we only ran about half of it. The course wound through some pretty difficult terrain and the path was narrow, so any time we ran into a group of walkers (human non-runners, not code for zombies), we just sort of had to walk behind them. Which wasn’t bad, because first of all there’s strength in numbers. Slow people in the front can and did distract the horde, so hey, dummies, we could have passed you but we chose to use you as human shields, instead. Also, like I said, that terrain was difficult. Running through some portions probably would have resulted in a broken ankle, although apparently some weirdos in the super advanced set finished in like 24 minutes. Which is crazy. Clearly they’re experienced trail runners, and I saw a few, they looked like Holocaust survivors. No thanks.

I finished with a time of 1:02, which put me in 222nd place out of 383 runners in my wave. And while that’s not in the top half, it’s still in the top 2/3’s (I think, keep in mind that I can’t do math) and I’ve never done anything like that before! I didn’t even train like I was supposed to! And it was only 3 miles so not really significant for real runners, but I am so FREAKING proud of myself for doing it, and thankful to Stephanie for making me, and to James for stepping in for Ron and then kicking so much ass in our slow people group even though he runs marathons!

It’s worth noting that I finished “infected,” which means that zombies got all three of my flags. BUT it’s also worth noting that my first flag didn’t get grabbed until we were halfway through, and most of the runners were either already dead or down to one flag by then. My final flag was grabbed near the end, in a steep, dry creekbed by a zombie who looked like Jesse from Breaking Bad. Stephanie (already infected) ran a good screen through about five of them, but when you’re stonewalled by three and hesitant to jump into a dangling root system that was probably crawling with brown recluses, you just look the zombie in the eye and go “take it, dude.” He did.

The point is that I lasted way longer than I thought I would, and at each zombie obstacle, my brain turned into a “go go GO” machine (even when some jackhole pushed me down in the first sprint, and Stephanie reached out a hand like “you must SURVIVE!”). I mean, I’m sure I looked like a retarded velociraptor caterwauling across a hayfield, but I still made it across and deked enough of them that at one point, I thought “you know, I am not completely terrible at this.” I even suggested running a few times, both uphill and after we were covered in mud after the mud hole obstacle, the mud crawl obstacle, and the water slide.

Yeah, those things. If you’re not doing a 5K because running in, like, a straight line seems boring, please train for like 6 weeks and do the Zombie 5K. It was so much fun and I’m so glad I did it, and I’ve already begun talking it up to Graham in the hopes that he’ll do it with me next year. And maybe Courtney, because she’s small and scrappy and of my Seattle friends, I think she’d be best at it.

The pain I’m feeling today was totally worth the experience, and sometimes the best advice is “DO IT.”

I'm Erin. I have tattoos and more than one cat. I am an office drone, a music writer, and an erstwhile bartender. I am a cook in the bedroom and a whore in the kitchen. Things I enjoy include but are not limited to zombies, burritos, Cthulhu, Kurt Vonnegut, Keith Richards, accordions, perfumery, and wearing fat pants in the privacy of my own home.
View all posts by erineph →
This entry was posted in I Heart, Stuff I Didn't Know Before, The Zombie Apocalypse. Bookmark the permalink.