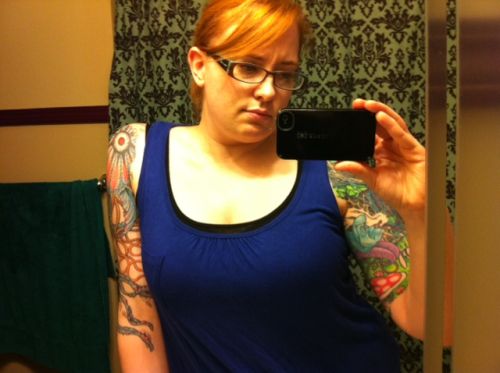 This is what I wore to work today. You can’t see the bottom but it’s jeans, and the top is some loose tank top thing with another tank top underneath. You know, because of decency. I’ve worn this shirt combination to work more than a dozen times. It’s comfortable, it was cheap, and until today, no one has ever complained.

Today, though, I got an IM from the woman who sits on the other side of the cubicle partition from me. The IM said:

I had no idea what this meant, but because we hadn’t spoken at all that day and I was busy enough to have heartburn, I ignored it.

Several hours later, I was gathering up my stuff to go home for the day. I get to work before seven so I leave at 3:30pm, which means that pretty much everyone is still at their desks, so why, then, did the woman who sent me the IM think this was an ideal time to look at me, make circular hand gestures above her chest, and announce, “You might want to cover those up tomorrow.”

The people surrounding her desk whipped their heads around at this. It’s not out of the ordinary for this woman to say something dry or a little off-color, but her tone didn’t sound like she was joking, and also what she said was about my tits.

“What did you say?” I asked, glancing down at my chest to make sure no one could see my areolas. Nope, no areolas. No nipples. No actual boobs at all, just the top half an inch when it stops being just chest (and for me as well as other women with D’s, that’s not too far below my collarbones). Otherwise, I was totally covered and decent, just as I’ve been every other time I’ve worn this shirt and every other day I’ve come to work in my life.

“Cover those up,” she repeated. “Earlier they were really out there.”

“Orrrrrr maybe you could just not look at my fucking boobs all day.”

“That’s what I would have suggested,” said Andy, a reasonable co-worker who witnessed this.

“Maybe you should take a picture,” said DJ, another co-worker who is dead ringer for an Amish lady who spends large portion of her day commenting on cat photo albums on Facebook.

At this, the woman who’d made the initial comment took out her phone and pointed it at me as if to take a photo of my chest.

“Do it and I’ll have you fired in a minute,” I said, and she put it down. “I’m leaving now because my shift is over, but also I don’t feel like getting sexually harassed anymore.”

On my way out, I ran into a friend who works in our department and told her the story. Reflexively, she looked at my chest and confirmed that I was covered up, and that nothing about my appearance was problematic or distracting. Her friend did and said the same, and so did another friend who stopped outside to smoke on her way out.

I already knew this and I’m planning to wear the same thing again some other day, mostly because I’m too cheap to buy new shirts when the ones I have are perfectly good. I also know that the woman who made the comment was either trying to make a terrible joke (unlikely) or was bizarrely drawn to my boobs and made to feel insecure in their presence (obviously). What I don’t know is why anyone would make a comment like that when someone’s boobs aren’t actually spilling out of their clothing, especially when the boob-haver isn’t any kind of direct report, especially when the boob-haver isn’t a friend of the commenter, especially when other people are listening, and especially especially when it’s a woman making the comment, as if I need another fucking female trying to objectify these things I can’t just cut off my chest to make everyone more comfortable.

The woman who made the comment isn’t my supervisor, she isn’t my friend, she clearly has no tact, and she’s not small-chested. She’s kind of a large person, so I understand that if she has some cleavage showing (which is rare, but who even cares?) it’s probably because it’s really hard to avoid cleavage when you have big tits. So I don’t say anything about her cleavage, both because I don’t care and because it’s none of my fucking business. I can’t even see her boobs from where I sit. The partition comes up too high and she sits too low and I have too much shit to do to even acknowledge that she’s there, let alone notice the exposed surfaces of her body. Her cleavage doesn’t affect my ability to do my job, just like my cleavage shouldn’t affect her ability to do hers. I mean, what a fucking asshole. What a bitch-faced fucking asshole. What does she want, for me to duct-tape my chest down before leaving the house every day? What the fuck?

I’m not reporting her to HR, by the way. I know some of you would want me to and I know that I could, but when I consider that a) she doesn’t affect my employment, b) I got to tell her off in front of people and c) I won’t have to look at her fucking face for much longer anyway, it’s really not worth it to me to file a report on her being an idiot. It’s not going to stop her from being an idiot or objectifying anyone else, not for their boobs or being skinny or wearing fancy clothes (the latter two are also things she’s mocked people for, as well). It’s not going to stop her from being an insecure garbage pile of a person. And it’s certainly not going to stop her from staring at my boobs, which sure as hell aren’t going anywhere.

I'm Erin. I have tattoos and more than one cat. I am an office drone, a music writer, and an erstwhile bartender. I am a cook in the bedroom and a whore in the kitchen. Things I enjoy include but are not limited to zombies, burritos, Cthulhu, Kurt Vonnegut, Keith Richards, accordions, perfumery, and wearing fat pants in the privacy of my own home.
View all posts by erineph →
This entry was posted in Everyone Else Is An Idiot, Paychecks Are Important, WTF. Bookmark the permalink.