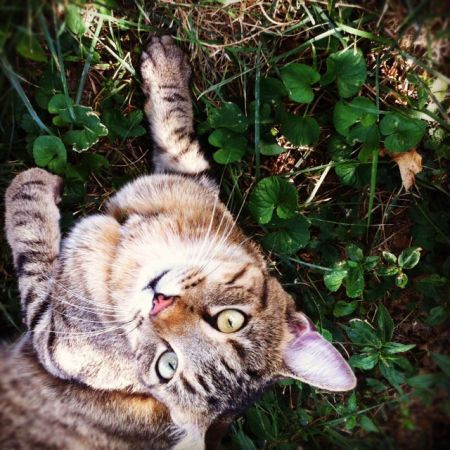 BeeBee is a cat that hangs around our backyard. Well, that hanged around our backyard, because I haven’t seen him for a week and it’s odd for him not to show up at least once every couple of days. I know his name is BeeBee because he usually wears a harness with a nametag attached. In addition to his name, the nametag displays the name, phone number, and e-mail address of his owner. I called the owner – Sheryl Stone, I think? – the first night I saw BeeBee. As a pet owner, I assumed that she’d be a nervous wreck over her missing cat. I mean, I would be. I was the one time The Cat escaped my apartment in San Diego by literally punching the sliding screen door out of its frame. Which sounds tough, but I also lived next door to a nature preserve full of feral cats, all of whom were street gang members compared to The Cat, who was fat, spoiled, and not at all prepared for getting his ass kicked in the apartment complex’s parking lot. And who practically leapt into my arms when I found him that night and brought him home, never to attempt escape again.

When I explained that her cat was in my backyard, she said “Uh, yeah, well, I can’t really keep him in the house, but I keep the tag on him in case somebody runs him over. I’d hope that someone would call me if that happens.”

“No, he’s a really friendly cat and I don’t mind him being here, I just thought…you know what, nevermind.”

Since then, BeeBee has come around a few times a week. We don’t feed him because we don’t want to set up an expectation that future tenants probably wouldn’t honor, but BeeBee seems content to come around for mostly pets and sometimes the water I leave out for him in the backyard. I do this because it’s been hot as balls lately, and BeeBee’s owner doesn’t seem concerned with keeping him inside even when the temperature is above 100 degrees every day.

The last time I saw BeeBee was a week ago, and he didn’t have his harness. Graham hasn’t seen him, either. I don’t think any random person would have taken the harness off (I mean, why?), and judging by her past level of concern (ahem, none), I suspect that his owner took it off because she didn’t want to be bothered with phone calls or e-mails anymore. This really bugs me because BeeBee is a sweet cat who deserves to be taken care of, and also it’s hideously irresponsible and cruel to just abandon an animal like that. If I didn’t already have two cats to transport across the country, I’d have been more than happy to take BeeBee in and domesticate him. Which is possible as long as you have snacks. Just like with people.

It’s also entirely possible that if I ever see Sheryl Stone in person, I’ll slap her across the face and tell her what an irresponsible shitstain she’s been who didn’t deserve a pet.

I'm Erin. I have tattoos and more than one cat. I am an office drone, a music writer, and an erstwhile bartender. I am a cook in the bedroom and a whore in the kitchen. Things I enjoy include but are not limited to zombies, burritos, Cthulhu, Kurt Vonnegut, Keith Richards, accordions, perfumery, and wearing fat pants in the privacy of my own home.
View all posts by erineph →
This entry was posted in Everyone Else Is An Idiot, I Just Can't, Photos, Sads. Bookmark the permalink.