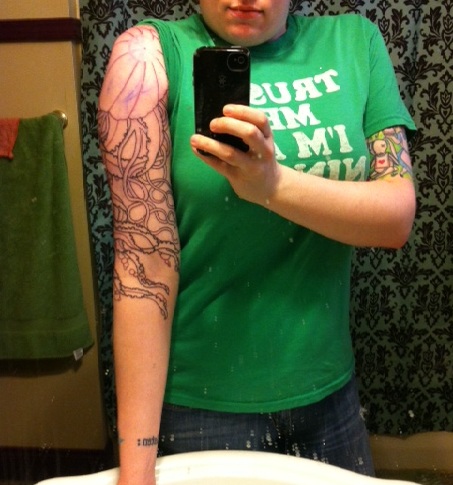 Hoooooo boy this hurts (and hoooooo boy is my bathroom mirror dirty). I’m not a bleeder but I am a bruiser, and all over each line of this, my skin is red, warm, and achy. Which is normal, amateur un-tattooed doctors of the Internet. Infection is not an issue. It’s less than 24 hours old and the result of trauma, and I’ve paid for this experience enough times to not be alarmed. I also have 3 more sessions scheduled before completion, although I think it might not even take that long and for some reason, I’m always most impressed with the outline portion (which is what this is).

While I was waiting at the tattoo shop yesterday, my grandmother called. I told her I’d planned on calling her that day, but that I was getting a tattoo and didn’t want to tell her where I was because I thought she’d be mad. She said that she didn’t care because it was my body and my choice (which isn’t really true, as every time I get a tattoo she tells me not to get anymore) and that the only thing she was concerned about was that I would run out of room and start getting tattoos on my face (also not true, at least as long as I stay out of prison).

My dad called while I was in the chair, and when I called him back later, he asked where I was and,once I told him, asked what I’d done.

He didn’t make actual words, but the general theme of his response was mild disapproval. To his credit, this is a long way from what his response would have been ten years ago, and at least he no longer purports to know anything about the job market or how it is actually possible to cover tattoos with a light cardigan.

The thing is, I don’t feel like I have much of a choice in getting all of these tattoos. I mean, obviously I have a choice to make the appointment and sit through the work and pay for it, just like I have a choice to not be a smoker and continue to say “please” and “thank you” to people even as an adult when no one can smack me around for forgetting it. But you have to understand that when I was younger, I’d dream about standing in front of the mirror and seeing my arms covered in tattoos and I’d think “right, finally, this is the way I’m supposed to look.” It just feels better. It’s like I was always supposed to be this way, so every time I get closer to it, looking in the mirror becomes that much more “this is how it’s supposed to be.” 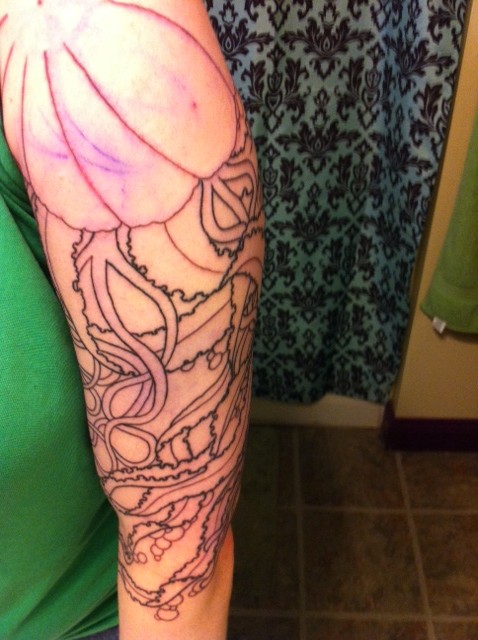 The next appointment is on June 1st, where some shading and probably negative space stuff will go in, and I get to deal with getting my armpit tattooed all over again.

I'm Erin. I have tattoos and more than one cat. I am an office drone, a music writer, and an erstwhile bartender. I am a cook in the bedroom and a whore in the kitchen. Things I enjoy include but are not limited to zombies, burritos, Cthulhu, Kurt Vonnegut, Keith Richards, accordions, perfumery, and wearing fat pants in the privacy of my own home.
View all posts by erineph →
This entry was posted in I Heart. Bookmark the permalink.