The weather’s been beautiful here lately, all sunny and 80 for the past few days. Not typical of St. Louis in March, and also it’s supposed to start raining tomorrow. People with Midwestern inferiority complexes are quick to acknowledge the capriciousness of our weather and try to compensate for it by claiming that they need seasons to feel normal. Well, everywhere has seasons, it’s just extremity of the seasons they’re after. But it really is true, at least for me, because I lived in a place where it was 75 and sunny all the time and hardly ever rained and everyone always says how lovely it is. But I hated living in San Diego. I spent most of my time there depressed for other reasons, but when the weather’s nice all the time, you’re not really motivated to get outside and enjoy it. What’s the point? It’ll all be the same tomorrow. Might as well go back to sleep and see if I can make 14 hours this time.

When I came back to St. Louis, I made sure to appreciate the changes in the weather. Rain? Sure, sounds okay. Snow? Driving sucks but it sure is pretty. Cold weather? Bulky coats hide fatness! Humidity, tornadoes, and freezing rain? Yeah, um, those are terrible, and I could deal with never having them again. What I’d also like to forget about is what happens when there’s beautiful weather, and by this I mean that some of the worst fucking people come crawling out of their holes and the rest of us have to deal with them.

I don’t know what it is about the sun, but I have to believe that some people exit their houses while looking directly into it, because other than blindness, how else do you explain the way a sunny, temperate day causes everyone to gambol casually into the street and, like, stay there, like cars aren’t bigger, heavier, and more dangerous them people, or like the people in them aren’t using the road to get anywhere?

Or the petition people, who I truly do feel sorry for because they must be even more desperate than those people who dress up as Lady Liberty and hold signs pointing to the nearest tax preparer, but come on, man! I just want to go to Petsmart and buy a cat leash (Graham’s idea, I swear). I don’t want to be asked if I want the minimum wage to be raised. I mean, yes, I do want it to be raised, but at the same time, I don’t want to write my name, address, and e-mail on a stranger’s clipboard because you probably don’t even know the finer points of what you want me to sign. Look, I’m really, really sympathetic to your situation and I don’t want you taking a job where you have to sell terrible art out of your car, but please stop lurking around parking lots.

The worst beautiful day offender, though, is a MABRIC. No, not “Maverick,” I said MABRIC. MABRIC stands for Middle Aged Bitches Riding In Convertibles. I don’t know what it is about middle-aged white women that makes them want to go out and buy a Sebring with a soft top, but cripes, ladies, please stay off the roads. For one, none of you can manage the speed limit on the interstate. You either drive 5 miles under after too many years piloting a minivan or you drive 20 miles over because…you’ve got something to prove? Something about the demise of your childbearing years? I don’t know. Two, you’re all terrible drivers. Stop reinforcing that fucking stereotype – ie, ruining it for the rest of us – and check your goddamn mirrors. Three, you look ridiculous. There are hairdos besides the liberated mature lady pixie cut and anything involving a scrunchie, you know. Go buy some deep conditioner on the way home. Four, I’m all about women doing things equally, but can’t you leave the dumb car decision making to the men? We know why they get convertibles. It’s because their penises don’t work. Either they don’t work for a medical reason or they’re just pathetically uninteresting to anyone anymore and thus require a fossil fuel-powered piece of machinery that will make any penis problem vanish into carbon monoxide laced air. The MABRICs are a pox on the springtime, everyone, and I know this for sure because I encountered six this afternoon.

In case you still/now think I’m a curmudgeon about everything including springtime, I present this photo of the tree in our front yard: 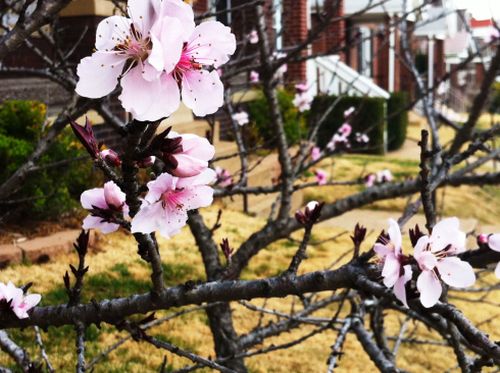 Until recently, this tree was of the scary Tim Burton variety and destined to be ripped out of the yard due to its unsightly and seemingly very dead nature. But lo! It’s alive! At least partially! It’s growing flowers! And they’re cherry blossoms, maybe? We might have a cherry tree in our front yard! Spring has sprung, bitches!

I'm Erin. I have tattoos and more than one cat. I am an office drone, a music writer, and an erstwhile bartender. I am a cook in the bedroom and a whore in the kitchen. Things I enjoy include but are not limited to zombies, burritos, Cthulhu, Kurt Vonnegut, Keith Richards, accordions, perfumery, and wearing fat pants in the privacy of my own home.
View all posts by erineph →
This entry was posted in WTF. Bookmark the permalink.