I’m selling my LouFest tickets. This is a real shame, as I’d purchased at least one of them for Graham’s birthday (he wanted to see The Roots, I wanted to see The Hold Steady) and was really excited to go. Inconveniently, Graham wrecked his bike – that would be a bicycle, since everyone seems to have trouble understanding this part – last week and a lot fucked up his face. The damage report includes a lot of stitches, a badly broken nose, and some really ugly road burn. Luckily, it does not include any lost teeth or brain damage, and for this I think he is extremely fortunate. He’s getting surgery to fix his nose tomorrow, and since he can’t work for a week because an infection in his nose would likely crawl up inside his brain and kill him, he certainly can’t go to LouFest.

While I’ve gone to concerts alone before, I’d never gone to a daylong concert alone before, and frankly, I’m just not sure that I’ve got it in me. I also feel weird about selling just one ticket to one of my friends. I mean, I think I’m pretty great as a person, but $35 to hang out with me for a day is rather steep considering that I’m not allowed to put out.

So I put my tickets on Craigslist. Some dude from Indiana is supposed to buy them from me on Saturday. If he shows, great. If not, I know at least one other friend who’s going, so maybe she and I can do a Hold Steady-Deerhunter-Roots block and I can write just one of the tickets off as a loss. I’m certainly not selling them to the dudes who asked if I’d accept $25 apiece. Um, dudes? I don’t know anything about your reading comprehension skills, but let me break this down for you:

1. I advertised the tickets at $35 apiece. This is $3 less per ticket than the face value, which, I admit, is not because I’m particularly generous but more because I prefer round numbers.

2. I did not mention “OBO” at any point in my listing.

3. Negotiating on Craigslist is fine if you’re buying gently used furniture. Not so much when you’re buying never-been-used concert tickets.

4. Telling me that you’re a “poor college student” is a waste of your time as well as mine. First of all, we’re just coming off the summer. You’ve had three months to work and earn cash. Second, as far as I’m concerned, if you have the money to go to college, you have the money to pay for these tickets. Third, seriously, go fuck yourself. Go fuck yourself and your Internet access and your entitled fucking Gen Y attitude to never pay full price.

5. Telling me that you’ll pay $50 for both and I can get the cash today is also a waste of time. Hey, dumbshit, I may not have done very well at algebra, but I know basic fucking addition and subtraction. I said $70 for both tickets. $50 is $20 less than $70. You are not offering me a deal, you’re being unreasonable. Also, I’m not a crack addict, so it’s not like I’m drooling over your extravagant “cash today” offer. And if you’re going to lowball me, try not to do it from a Washington University staff member address. You probably make more money than me and can therefore afford $70 for two tickets to an all-day festival.

6. Good luck with the scalpers, you turds.

Prior to listing the tickets on Craigslist, I posted stuff on Facebook and Twitter in case people I semi-know would be interested. I felt weird about basically shilling for something to these people, so on Twitter, I mentioned that I was really “sluttin’ it up on the Internet with this one.” It wasn’t until later that I considered one of my Twitter friends’ feelings about the word “slut” and it’s possible permutations (“sluttin’,” naturally). She’s not a fan for what I guess some people would call feminist reasons, which is kind of an unfair blanket term but it’s not my place to explain. Also, I don’t really feel like typing it. She can, if she wants.

After I thought about my one friend being offended by the word “slut,” I thought about a few other things I say that would offend other people. I’m not talking about average profanity; the word itself offending people is different from the implied meaning of the word offending people. So instead of words like “fuck,” “shit,” and “goddammit,” I was thinking more about words like “bitch,” “retarded,” and “fat.”

The word “retarded” is offensive for obvious reasons, and although I enjoy the way it sounds and still think it quite frequently, I have made more of an effort to stop saying it so much. The word “bitch” is probably never going to leave my vocabulary because it’s just too great. While I understand why some people are offended (women are called bitches for speaking their minds and men aren’t, blah blah blah), for me, “bitch” is used for a person who is being a bitch. It’s not reserved for women who are speaking their minds or being assertive, and it’s not a gender-based powergrab that ignores a man’s behavior (though I tend to call men “asshole” more than “bitch,” just because it seems to fit better in my head). Sometimes a bitch is just a bitch. Get over it.

Then there’s a word like “fat.” I am so sick of people pulling the fat-shaming card. Bitch, I am not fat-shaming you. I am simply describing the size of whatever it is I’m looking at. If you’re fat, you’re fat. Deal with it. I have. I’m not saying that fat is repulsive, or unhealthy, or morally wrong. I mean, I find a certain amount of fat to be repulsive and a certain amount is definitely unhealthy, and if you’re being biblical about it, then I suppose gluttony could be considered morally wrong. But overall, it’s just a description.

And “slut.” Like I said, I know about my friend’s feelings on the word, and I do understand where they’re coming from. But I say “slut” because it’s not offensive to me. Now, this is within reason. The word “motherfucker” isn’t offensive to me, either, but I don’t say it in job interviews or in front of children. I know about tact. So I don’t say “slut” in every situation, but I do think there are circumstances when it’s appropriate and/or funny.

Kind of like this thing I found on Tumblr. I don’t say “faggot” ever and I was a little annoyed by its use here, but this photo? Are you kidding? Dog, what are you even doing here? 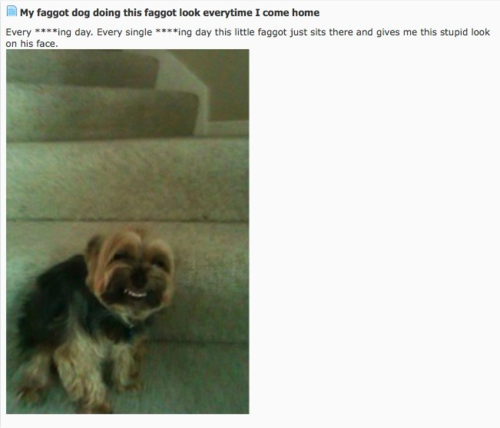 Are you smiling? Are you grimacing? Why do you do that every time your master comes home? Is it because he’s a self-loather who casually says “faggot” yet owns a Yorkshire Terrier? I don’t know the answers to any of these questions, but I found the above funny.

That’s really all I’m going for with anything I say. I’m sure there are more intelligent jokes out there, but I am nothing if not willing to make an easy joke. My sexual history alone should tell you that much.

I'm Erin. I have tattoos and more than one cat. I am an office drone, a music writer, and an erstwhile bartender. I am a cook in the bedroom and a whore in the kitchen. Things I enjoy include but are not limited to zombies, burritos, Cthulhu, Kurt Vonnegut, Keith Richards, accordions, perfumery, and wearing fat pants in the privacy of my own home.
View all posts by erineph →
This entry was posted in Everyone Else Is An Idiot, Sads. Bookmark the permalink.

7 Responses to This Stupid Look