My parents are not on the Internet. Jealous? It’s pretty great. My mother created a Facebook for work and did absolutely nothing before she abandoned it, and my father just figured out about Google maybe two years ago. I’ve tried explaining the concept of the Internet to him multiple times, but the only part he finds appealing is Netflix. My sister doesn’t have the Internet, either, and although my grandmother would be endlessly talented at whipping mean troll comments at total strangers, she is definitely never getting online.

The only family members I’m connected to on the Internet are my cousin and her husband. She and I are perhaps the most alike in our family (in that we are not really like anyone else), and even though he is a pastor of his own church and I am an atheist, my cousin-in-law and I get along fine. I don’t post shitty comments on his church-ish statuses, and he doesn’t begrudge me for my foul mouth on my own page. Also they’re both smart, funny, tolerant individuals who understand that getting offended about stupid stuff is a waste of time.

With that said, today I got offended. I’m sure that my being offended is a waste of time, but seeing as though I get offended on a fairly rare basis, I feel that I may be due.

One of the people I follow on Tumblr is a family member of a friend. I’ve been to parties and at bars with them on more than one occasion, and on the whole, they’re a cool person and I enjoy their acquaintance. They’re also a Christian, which is fine with me because most of the people I know are Christians. I live in the middle of the United States, it’s a fact of life. They also post Christian-themed stuff on their blog sometimes, which, again, fine. It’s their blog, they can post whatever they want. Not once have I ever been offended by this person’s faith or the way they expressed it. Neither has any real effect on my life.

Today, though, this person posted: “I never could quite understand why atheists hate Christians so much. I mean, you try to tell them one little thing about where they might end up, and they tell you to go there instead.”

Um, okay. Like I said, I’m sure that my being offended is a waste of time. Being offended (at least in the first world, where our “problems” would be hilarious if they weren’t so hideously skewed from the rest of the planet’s) is almost always a waste of time, and this person’s beliefs are fine with me and have no real effect on my life. Plus this person may be joking for all I know, and I am both happy and certain that they didn’t think about me for even a fraction of a second while writing the above.

But it’s just so incorrect. For one, atheists don’t “hate Christians so much.” While they may not agree with the dogmatic tenets of Christianity and would probably decline the invitation to accompany you to church, most atheists realize that they are outnumbered in a world that is overwhelmingly Christian or at least monotheistic, and know that from an historical perspective, it certainly does suck to be in the hated minority. Most atheists I know (myself included) prefer a “live and let live” policy, or at least a “quit persecuting me just because I don’t want to be in your club” one. Essentially, it just doesn’t do to hate someone who doesn’t think the way you think. So no hating.

For two, and again, I know I’m being pissy because I know this person’s voice and it sounds like they might be joking but “you try to tell them one little thing about where they might end up, and they tell you to go there instead.” OH COME ON MAN. You know what? You were wrong about atheists hating Christians but you’re right on this one. For starters, you don’t know anything about Hell. You don’t know who’s going there, you don’t know what it’s like, you don’t even know that it exists. Second, you have no business telling anyone else – regardless of their religion – that they might end up there. I would never assume to tell you or anyone else how to pray because it’s not my business what you or anyone else does with their time. Third, you really really really have no business telling someone whom you know is an atheist that they might end up in Hell, both because it’s ignorant (did you not just hear me say that I don’t believe in god at all?) and because it’s fucking rude (you’re obviously less concerned for my eternal soul and more concerned with being right).

Guh. Sometimes I think my entire existence can be summed up in two sentences:

YOU ARE NOT THE BOSS OF ME! and YOU DON’T KNOW MY LIFE!

But like I said about a million times, I’m sure I’m making something out of nothing, and like I said once, I know this person was not speaking directly to me, nor do they have any reason to consider my feelings on the matter before they share their own opinions. I keep saying these things because they’re true, and because it really pisses me off when people are constantly offended.

I’m not saying that you don’t have the right to disagree with anyone, or that you shouldn’t experience indignation about things that truly do anger and upset you (rape/Holocaust jokes, for example). Despite my preference for the contrary, we are all going to get our feelings hurt at some point or another. Can’t avoid it, better accept and expect it to happen. Considering this, I think it’s a waste of time to continually censor yourself because someone else might get their feelings hurt. I mean, have manners and tact and care about people and all that bullshit, but if you’re constantly worried about someone else might think, then you’re never going to create anything of substance.

I’m super careful not to offend anyone when I’m writing work e-mails. That’s my job, but it ends there. When I’m writing music reviews, blog entries, tweets, Facebook statuses, etc., I write what I think. That’s it. I am not responsible for your feelings. You are responsible for your feelings. And if you find that you’re offended by quite a lot of what you read, see, and hear, then perhaps the problem isn’t everyone else. Perhaps the problem is you. 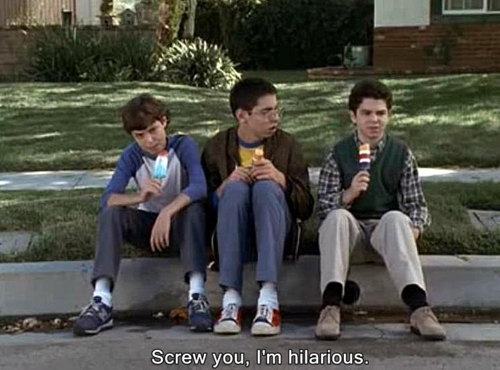 I'm Erin. I have tattoos and more than one cat. I am an office drone, a music writer, and an erstwhile bartender. I am a cook in the bedroom and a whore in the kitchen. Things I enjoy include but are not limited to zombies, burritos, Cthulhu, Kurt Vonnegut, Keith Richards, accordions, perfumery, and wearing fat pants in the privacy of my own home.
View all posts by erineph →
This entry was posted in I Just Can't, Writing, WTF. Bookmark the permalink.

1 Response to OH COME ON MAN