If anyone was thinking about buying a 2006 Mazda 6 but hesitated because you thought the alarm horn might not be loud or persistent enough, I’m here to tell you that you can relax. It’s plenty loud, and that alarm button is touchy enough to deter potential rapists when you’re not yet sure of their motivation (possibly because they’re blocks away). I know this because I accidentally pressed my alarm button today. Twice. It’s embarrassing enough to be the cause of the noise you so often curse when you’re trying to watch TV in the sanctity of your own home; it’s a whole other level of embarrassing to be the cause of the noise while you’re sitting inside the car that’s making it. During the second alarm, one of my elderly neighbors poked her head outside to ask if everything was okay.

“Oh, I thought there might be robbers out here!”

“Nope, no robbers. Just stupid me, trying to get out of my stupid car.”

Even on the days where I manage to wake up early enough to take a shower, straighten my hair, and walk out of the house like I’m not some kind of squatting hobo, eventually something will happen to slap me back down to earth.

I choose to attribute this to mild sleep deprivation, triggered by four hours of sleep on Sunday night followed by a daylong wine hangover on Monday. I don’t normally drink (so heavily) on work nights, but some friends I haven’t seen in months invited us over for dinner. Awhile ago, I’d written something about being disappointed about that friend suddenly seeming like they didn’t want to be my friend anymore. Although we finally hung out and it made me happy because I did miss it during those several months of nothing, I don’t regret writing what I did. It was how I felt at the time, and I’ve found that as I get older, I regret less of the things I say because I take the time to mean more of them.

There’s a line in David Bazan’s song “People” that goes “when you love the truth enough, you start to tell it all the time / and when it gets you into trouble, you discover you don’t mind.” It’s not that I lied very much when I was younger, but I think that the tendency to exaggerate situations and your feelings about them come more naturally in youth, and now that I’m older, it doesn’t seem as necessary to express everything like that. I think more carefully about things before I say them because I want to be sure about them, and because one of the more valuable things I’ve learned with age is that there’s really no benefit to talking shit all the time.

It’s just better to be confident in what you say. Because I’ve taken the time to consider what I’m thinking and how to communicate it, good fucking luck trying to make me feel bad about it. I know what I’m saying. I meant it. I’m responsible for my own feelings, just as you’re responsible for yours.

But back to the mild sleep deprivation, which is way more interesting than things like principles.

After Sunday’s dinner and Monday’s hangover, I contemplated a week of show reviews (The Coathangers tomorrow, The Pains of Being Pure At Heart on Friday), parties, and still not very much sleep. Then I thought about all the things I wasn’t doing, like writing fiction, reading the surplus of books I seem to have acquired lately, and oh yeah, sleeping.

We’re shutting down The Val Kilmer Project at the end of the week, though, which didn’t suck up too much time but it was an easy way to waste it (if you’re too lazy to make the jump, basically we’re sick of talking about Val Kilmer every day). Shutdown aside, I did find this trailer for the upcoming Twixt. Francis Ford Coppola did it, and it’s about Val Kilmer being a washed-up writer who has some scary dream and there’s a murder and apparently there’s a 3D portion, which I’m not too excited about but the glasses/masks they gave out at Comic Con to screen some of the film were fucking ace. 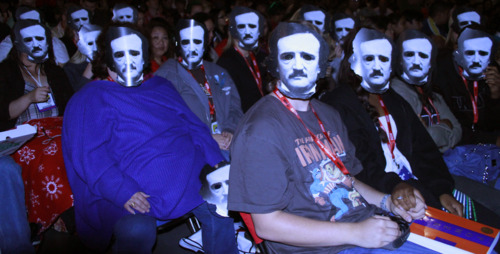 (if you didn’t know this was at Comic Con, I think the gigantic person in the Snuggie sitting behind a grown man in an Iron Man shirt were pretty handy indications.)

Also here’s the trailer, about which I’d like to say two things:

1. You should all know that when I win the lottery, I’m hiring Tom Waits to narrate my dreams. I don’t need him all the time, but three times a month would be sufficient.

2. The writing shots starting at about 1:30 (a better sequence at 2:00, though) make me cringe. I’ve been doing more stuff for KDHX lately, and with all the deadline work coming my way, my involvement in the workshop has fallen to a personally disappointing level of zero. I have like four pieces either halfway or mostly done, but I can’t find endings or the paragraphs just hang there, and that feeling of losing my grip on the words just makes me want to die.

I'm Erin. I have tattoos and more than one cat. I am an office drone, a music writer, and an erstwhile bartender. I am a cook in the bedroom and a whore in the kitchen. Things I enjoy include but are not limited to zombies, burritos, Cthulhu, Kurt Vonnegut, Keith Richards, accordions, perfumery, and wearing fat pants in the privacy of my own home.
View all posts by erineph →
This entry was posted in Letters to My Younger Self, The Pop Life, Writing. Bookmark the permalink.

1 Response to The Missing Words