Although my parents are neither Southern nor from the country, St. Louis is a weird place and people have food traditions that aren’t necessarily based on their upbringing.  Plus, no matter what the region, poor people food is poor people food, and we were definitely poor people.  My parents made Hoppin’ John every New Year’s Day.  It’s a traditional stew to ensure good luck and prosperity for the rest of the year.  Hopefully, some of this luck will continue for me beyond 2011, especially when the world ends in 2012 (notzombiesnotzombiespleasedontmakeitbezombies).

My parents made their Hoppin’ John in a dutch oven, but those are expensive and I couldn’t convince them to buy me one for Christmas, so yesterday I cleaned the house, figured out my own recipe, and made it in a slow cooker.

You’ll do:
The day before cooking, soak the black eyed peas in a large bowl or pitcher full of water at room temperature.  Pick out and throw away any floaters. Before using them, drain and rinse the peas.

At the two hour mark, add the vinegar and stir again.  Cover.

At the four hour mark, add the tomato paste.  Stir, turn temperature to low, and cover.

At the five-and-a-half hour mark, add the smoked sausage.  Stir and cover.

Turn off slow cooker and uncover at the seven-and-a-half hour mark.  Remove the bay leaves and ham hock.  I like to let it sit for about ten to fifteen minutes so it thickens.

This serves a shitload of people on the cheap.  Serve on white rice (make 1 cup of rice for every two people) with hot sauce on the side.  I also make biscuits* with homemade apple-pear sauce**.  Making tasty food is how I get people to like me.  The only way.  Well, in addition to providing sexual favors, that is. 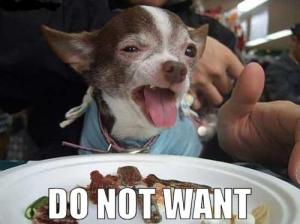 (my Hoppin’ John was actually the opposite of this, I just always forget to take food photos before I eat all of the food.)

You’ll do:
Preheat oven to 375 degrees.  In a large mixing bowl, combine dry ingredients.  Pour in the cold milk and combine as best as you can.  If there are still spots of dry flour or it’s too hard to mix, add the heavy cream to the driest spots.

Microwave the butter cubes for 30 seconds.  This makes them easier to mix, but still allows for some whole pieces that you’ll need for moisture when baking.  Add the butter to the mixing bowl, combine.

Using either a non-stick or greased muffin tin (cooking spray is fine), scoop the biscuit dough into the cups.  These don’t need to be overflowing.  Place in oven, set timer for 20 minutes.

I honestly have no idea how long it takes these to cook.  Probably 30 minutes in all?  I don’t know, I take them out then the tops are golden brown, when a knife inserted into the center of a biscuit near the center of the tin comes out relatively clean, and when they smell toasty.

You’ll do:
Once the apples and pears are peeled and cut, place them into a baking dish or bowl.  Sprinkle with lemon juice and the white sugar, stir to combine.

Melt butter in a thick-bottomed, medium-sized saucepan over medium-low heat.  When the butter is melted, add the fruit and stir to coat.  After about five minutes, stir again to ensure all of the fruit gets heated.

After about 8 minutes, add brown sugar, cinnamon, and nutmeg.  Stir to combine.

When the fruit is just beginning to get softer, add the apple cider (or juice, whatever), and stir to combine.  Let this cook for about five minutes, or whenever it can hold a good simmer.  Stir occasionally.

Once the mixture has been simmering for a few minutes, add the cornstarch and stir again.  Lower the heat to very low and loosely cover the saucepan.  You’ll need to keep a small opening with the lid so the mixture can reduce (ahem, get thicker).  Stir occasionally.  When the pears have broken down into a thick sauce texture and the liquid can coat a spoon, it’s done.

Spoon this stuff over biscuits (or pancakes, or french toast).  Seriously good.

I'm Erin. I have tattoos and more than one cat. I am an office drone, a music writer, and an erstwhile bartender. I am a cook in the bedroom and a whore in the kitchen. Things I enjoy include but are not limited to zombies, burritos, Cthulhu, Kurt Vonnegut, Keith Richards, accordions, perfumery, and wearing fat pants in the privacy of my own home.
View all posts by erineph →
This entry was posted in I Eat, I Heart, The Zombie Apocalypse. Bookmark the permalink.